While planning out trip I read a blog about teaching English is Spain as a volunteer. Following up on this possibility, we discovered Vaughan Town and since Spain was on our itinerary applied to volunteer.
We had to pay for our own trip to and from Madrid but from Sunday to Friday our meals and hotel bill would be gratis. On Saturday night VaughanTown hosts a complimentary tapas reception at five pm at the same hotel the bus leaves from on Sunday morning. I booked us into this hotel for the Saturday night so we would be at the right spot on Sunday.
We made it to the tapas reception at the Eurobuilding in Madrid by five past five. This is where the Anglo contingent mee each other. We are the only Canadians in this group. There is a couple from Australia, fiveI or six from the states and the rest are from the UK. At least three of them seem to be living in Spain though. Several have done this before.
Two paid staff will accompany us to the resort and ensure everything goes smoothly.
I drank sangria, enjoyed the appetizers, this is supper. Our bus to El Rancho near Segovia leaves tomorrow at 10. We will meet the Spanish students then and we are encouraged to insist on conversing in English. No problem. Glad I have learned very little Spanish so it won't be a temptation.
The forecast for Segovia is for snow by Tuesday. Dress appropriately. Fine. I do not have room in my pack for more clothes, I will layer. And stay indoors as much as possible.
I do have a knit cap and gloves which came in handy in Finland in September. I guess we will be in the mountains. Today in Madrid was sunny, no jacket needed, just a long sleeved shirt.
25 November
We have a one bedroom suite with a small kitchen. I got up at 730, made coffee with the instant cappucinno pouches left over from Italy and enjoyed the view. The couches have such deep seats, like almost twice as deep as a sofa back home, really wonderful for tall people.
Our bus departed shortly after ten, every Anglo must sit with a Spanish person and chat. It must have been successful as I did not see much scenery and all of a sudden we were here. It is like a small village, el Rancho Resort.
I have my own room, in la posada el rancho, large room with floor to ceiling window with a study alcove. We had a three course lunch with wine and now get a two hour siesta break. Then more talking, supper is at 9. I have been voluntold for some kind of presentation maybe tomorrow night. It is a bit nerve racking, but we are all in the same boat. Everyone has been very nice, had lunch with two men from Spain and a guy from Scotland.
We are expected to mingle and eat with different people, 2 Anglos, 2 Spanish, all conversation in English. I had swordfish for lunch with fruit for dessert. The marzipan cake looked wonderful though.
Segovia is a province in the Castile Leon area of Spain. The Iberian Penninsula.
There is also a city called Segovia and Walt Disney's castles in Sleeping Beauty and Cinderella were both influenced by the Alcazar Castle located here.
Isabel 1 was proclaimed Queen of Castile on the spot where the gothic Segovia Cathedral stands today. She promised the financial backing for Columbus to rediscover America in Segovia.
We are not in the city though, just in the general vicinity. 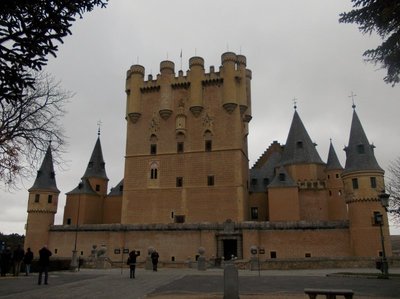 After our siesta we spent three hours talking one on one with Spanish participants. Supper was at 9, same drill as lunch, only choose different tablemates, 2 Anglos, 2 Spanish, talk. Both red and white wine are on the table, I drink water and sip a mouthful of red wine to be polite. I am exhausted. The Anglos are suppose to do 65 percent of the talking so the Spaniards can hone their listening skills. What does proactive mean, what is payoff, explain behaviour, wish I had lugged along a thesaurus to help me come up with synonyms. And a dictionary. Long day.
Monday
We get two wake up calls a day. The first one is at 815. Breakfast is compulsory. Then we go into our 50 minute assigned one on one sessions. It is really impressive how well some of the Spanish speak English. The lady I am with is a human rights lawyer. She started learning English two months ago. We have a complex conversation about her work with women in South America. I admire her for doing good works. She points out that by volunteering to teach English I help people like her go on to China or Africa to fight for human rights. Another man, 52, retired banker, is learning English so he can travel and talk to the people he meets along the way. He is very fluent, really good vocabulary and hardly any accent. We talked about Mark Carney leaving the Bank of Canada to head up the Bank of England. He was incredulous that the UK would hire a Canadian. Don't they have any good bankers in England? Apparently not. There are a lot of students here, recent graduates, mechanical engineering, business administration, there are no jobs, they are learning English to improve their chances, they are prepared to move, English will be their ticket. Interesting. Proactive and expensive. This will be one of four week-long retreats they attend during a ten month intensive course. It is costing them twenty thousand euros. I read our dollar dropped on the Carney news, you do the math.
Most of the Spanish are in something called the Master's program. There are four of these intensive "retreat" type events in the program. As the Anglos (native English speakers) come from a variety of countries the accents vary considerably. I can barely understand a few of the Anglos. We don't have anyone from South Africa among the Anglos or that accent would be in the mix. Thank goodness there aren't any Newfies or we would all be in a lot of trouble - well it would just add to the fun. We have a good group.
The youngest Anglo is from Wales and is not yet twenty. The oldest is at least my age. The Spanish are likely from early twenties to mid fifties at the most. A lot of people stay up partying til all hours but I am not one of them. I do not have that kind of stamina. The Spanish are great socializers and excellent dancers.
The challenges for the Spanish are daunting. First a fifty minute session with an Aussie. Then a fifty minute session with an American from the deep south. Then a Canadian. Then a Brit. We all sound different. They can party til two am and concentrate on English the next morning.

Also, among the volunteers is a young American woman who is married to a Spanish husband and lives in Madrid. She is a guitar player, singer, and composer and has entertained us in the evening, very good. She is, by the way, blind - but that does not define her. We are all impressed by her huge personality, and independence. So - if you are a decent human being and speak English as a first language you might like to volunteer. You do not need a hidden talent or be a ventriloquist or anything but if you can juggle or play the guitar you may well share your talent with an appreciative audience.
The second wake up call is at 430 pm. We get a siesta or free time from three to five. Anything between ten pm and nine am is free time.
Unemployment in Spain is over twenty four percent and the recent graduates blame the civil servants. Too many, too de-centralized, too much duplication. Of course if we trim all the fat from the public service there will be more people looking for work.
Did the USSR fail because they were broke, was the Ottoman Empire just too big to manage, where are the Romans now? Spain is in bad shape but Greece is in terrible shape. You would think Greece could use some tourists' dollars, why are the transportation workers on strike?? Why are shareholders more important than customers, how can Finland offer free University and free health care, why are Norwegians richer than Albertans, I ponder these questions before I go to sleep.
27 November, Tuesday
Chilly and overcast, it snows late in the afternoon. A group of us Anglos had free time so we went to the small medieval city of Segovia where a huge Roman aqueduct from the first century is the best preserved in all of Europe and the world. A very pretty, remarkably clean old town boasts a city wall, the last gothic cathedral to be built in Spain (completed in 1768) and the enchanting Alcazar castle. 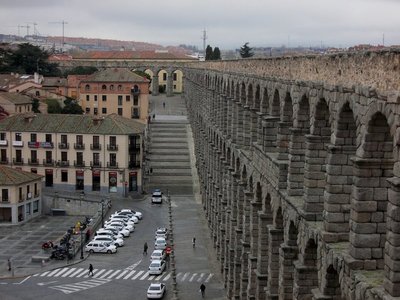 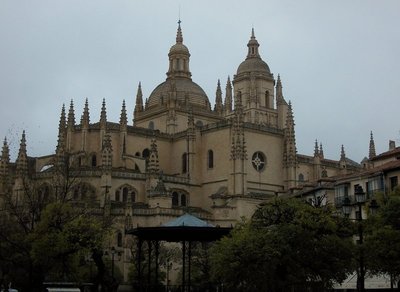 Segovia is an easy daytrip from Madrid. Also, it would be a pleasant stop for one or two days relaxation.
A recommended restaurant for coffee, tapas or meals is Meson Jose Maria, located between the aquaduct and the town square. A local recommended it to us and although we only had cappuccino I feel confident it is good, with reasonable prices, it was very busy with locals.
Teaching English as a volunteer was a good decision. It gave us the opportunity to meet a lot of Spanish people from all over the country, different age groups, different occupations, very interesting. Now that Spain is in the EU speaking English is more important. They are very expressive people and our job is to converse and explain the slang, the way we really talk, so that they can pick up the rhythm and the meaning. "Horsing around" "back to the drawing board' phrases like that.
It is rewarding to see the improvement in the Spanish students' pronunciation and comprehension over the course of 5 days of total English immersion. A few seem to take it really seriously and allow no phone calls, texts, emails in Spanish, they eat, sleep and dream in English for the duration.
Also we sample a lot of different Spanish food, the meals are large and we have selections to make every morning, what do we want out of three choices for first course, second course and dessert. Meals are lively occasions, conversing, drinking wine, breaking bread, do not use butter on the bread, use olive oil instead.
Also drizzle olive oil on vegetables - it is the Spanish way.